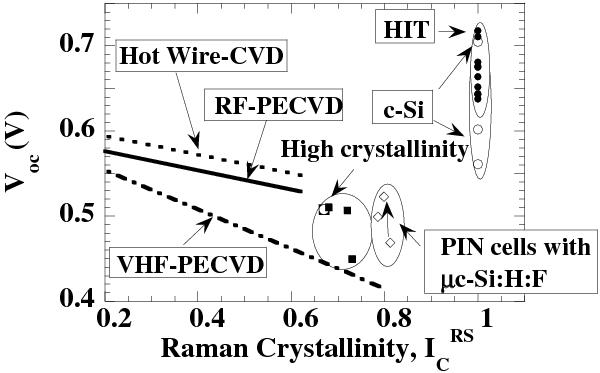 Results taken from various literature sources [1, 2, 3, 4] indicate the general trend of a decrease in the open-circuit voltage of μc-Si:H thin film PIN cells, with increase of the Raman crystallinity of the films. We also show an exception where the Voc actually increases [5] in a highly crystallized μc-Si:H:F cell, specially after interface treatment (indicated by the arrow). Also shown in the figure are typical Voc’s of classical diffused junction c-Si solar cells (open circles – 5, Green’s ref), of a “heterojunction with intrinsic thin layer (HIT)” cell on a P-type c-Si substrate [7] and of a HIT cell on N-type c-Si [8] (closed circles).

Data correspond to usage on the plateform after 2015. The current usage metrics is available 48-96 hours after online publication and is updated daily on week days.

Initial download of the metrics may take a while.